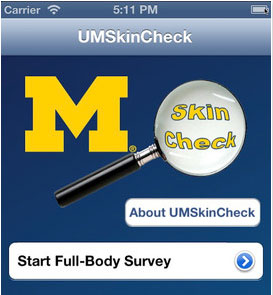 I love technology.  The office runs on Macs and iPads.  I installed a cloud based VOIP-PBX phone system.  My employees use an electronic time clock that they sign in and out of using their finger.  I learned enough rudimentary CSS to style this wordpress site.  So I was very excited to see a variety of apps come out for iPhone geared toward skin cancer.  The idea is cool, can you snap a picture of a mole with your iPhone and have software analyze the mole to see if its suspicious.  If this works, a lot of lives might be saved.

Can you use a mobile app to detect skin cancer?

A group of researchers at the University of Pittsburg tested 4 different iPhone applications that are meant to help you figure out if a mole is worrisome.  The results of their study are terrible.

In the study, they took 60 photographs of known melanomas and then 128 photographs of benign growths including normal moles and other growths that normal patients could suspect could be a melanoma.  Then, they analyzed these melanomas and benign growths using the iPhone applications.  Two of the apps were able to recognize 70% of the melanomas which means that they missed 30% of the melanomas.  However, what might be worse is that when the applications said not to worry, they were only right 40% of the time.  So, 60% of the time, the applications were providing false reassurance.  If people believed in these results and didn’t see their doctor because the application said the mole was low risk, 60% of the time they would have been wrong.  Instead of relying on the app to help them they truly would have been better off flipping a coin.  That’s a big problem.  The authors in the study did not disclose the names of the applications, but I think they were probably MoleDetective and Doctor Mole.  These apps are both about $4 each.  What is the value of a life lost to melanoma when these apps miss 30% of cancers and provide false reassurance 60% of the time?

Bogus smartphone applications have attracted scrutiny and will soon be regulated.  Last year, there were several iPhone applications that were sold to cure your acne with a blue light.  They were based on a medical light source that uses blue light to help acne.  However, to get the same treatment from your iPhone, you’d probably have to shine it on a pimple for 3 weeks straight to be equal to the 16 minutes of blue light that is usually used in the office.  Since the iPhone apps did absolutely nothing for acne, they were eventually removed from the store.  Congress passed legislation allowing the FDA to regulate these applications, but its not clear yet just how this will be implemented.  These current diagnostic apps for melanoma should be a prime target since the more they are used, the more people will be hurt.

There was one application that identified 98% of the melanomas, but it didn’t use a computer algorithm.  It allowed patients to take a picture of their mole and then they paid to have the picture sent to a board certified dermatologist who rendered an opinion.  This is something that we call store-and-forward tele dermatology and has been in existence for decades.  I think its actually a pretty good idea and I’m interested in trying to find a way to offer it in the clinic.

Using your iPhone to track moles

There are also a few applications out there that I think are VERY worthwhile for patients to look at.  Instead of trying to tell you whether a mole is benign or malignant, they help you keep track of moles so that changes can be tracked over time.  Enabling patients to do this themselves is brilliant.  The best application out there is from the University of Michigan, which has a world-renowned melanoma program.  Their app UMSkinCheck (free) does several things:

I like this app.  I wish that it was possible to link an application like this directly into my patients’ medical records so that we could take very hi-res pictures of suspect moles in the office and have those images pushed to their smartphones along with reminders for them to check on them as well as when to followup in clinic for their mole checks.  I think that we will have that technology in a few years, but right now we’re stuck waiting for Electronic Medical Records to mature beyond their infancy.  For now, get the UMSkinCheck app.

Melanoma In Redheads May Be Genetic